Stacey Stevens is an extrovert who loves to get things launched, learn, and make people laugh.

Those of us old enough to remember The Love Boat will understand how Stacey described herself in the past: 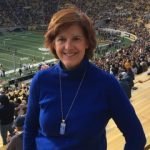 She thrives on formulating an idea, developing it, and passing the details on for individuals and groups to execute.

Her parents, first generation college students, emphasized how fortunate their family was, reinforcing the responsibility to provide opportunities for others. From them, she learned to become active in philanthropic organizations. That was the expectation while she was growing up.

During her college years, she was a contestant on the Wheel of Fortune. She’s happy to share the word that will be forever emblazoned on her brain with anyone who wants to take her out for a glass of wine or Fieldwork IPA.

Raised in one of Chicago’s northern suburbs before heading east to Philadelphia to attend the University of Pennsylvania, she returned to Chicago to work for Accenture as a computer consultant before deciding she wanted to have a role with more strategic impact.

The next part of her educational journey found her traveling to Stanford to get her MBA and finding her true home in the East Bay, where she has lived the last 20 years, with her husband, John Sweeney. She and John have two sons – her oldest in his first year of a Computer Engineering PhD program at UT Austin and her youngest a sophomore at Chico State.

At Stanford, she embraced the school’s motto and culture of “Change Lives, Change Organizations, Change the World” and has made it one of her long-term priorities. Several of her classmates founded nonprofits that have been operating for over twenty years. She is somewhat in awe of what they’ve built, feeling that there’s so much more she could be doing.

After surfing the Internet 1.0 wave for a few years, she leaned into domestic diva hood at the dawn of the new millennium, working in unpaid roles in her sons’ elementary schools, Scouts, FIRST Lego League, and other activities.

For the last ten years, she has worked with her alma mater, Stanford Graduate School of

Business, in an admissions consulting role. She loves learning about all of the talented and

motivated young people out there who want to change the world, knowing that they have the potential to do so.

Professionally, it’s always been a push / pull between analytics and team building. She has two equal, but opposite passions – coaching/motivating people and heads down analysis. Stacey has never met a spreadsheet she couldn’t disappear into for hours but also enjoys building a team and helping them grow.

programmer, strategy consultant, adult supervision at an Internet startup – they blur after a while. At this stage of my life, I’m probably not going to start an organization, but I would love to help others grow theirs.” 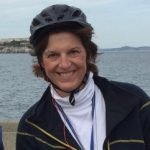 Stacey learned about Impact 100 when a casual friend invited her to a wine and cheese party. Her friend liked how well vetted the grant process was. With two young children, her friend didn’t have the time to research nonprofits to make sure that her money was being used well and liked the Impact 100 model where she could contribute $1,000 and know that it was going to a project that would multiply her donation. At the event, Stacey met Melody Silberstein, who convinced her to get involved beyond her donation. She eagerly began working with the Membership team and the Grants committee – and loves it.

“I’ve met so many interesting women, several of whom I now consider friends, and more importantly, I’ve learned about so many interesting organizations in our community that are doing amazing work. It’s easy to get caught up in your own bubbles and circles with everything going on in your life, so stepping out and meeting people from different worlds is a wonderful experience. I’m an extrovert who loves to learn about new things, and Impact 100 has provided me with an opportunity to do both.”

Stacey also contributes individually to non-profits she’s met through Impact 100, seeing the amazing work they do. She wants to support their ongoing work – even if they weren’t grant recipients. She feels that especially now, the need is so great to keep the good programs running in addition to working on the transformational projects that Impact 100 supports.

She’s currently auditioning for her next act – trying things she has never tried before – like tackling iOS programming, Pickle Ball, soldering, woodworking, mosaics, hip-hop dancing and programming a robot – all the fun activities her kids did that she didn’t get to do.

Though COVID has definitely had an impact on her thinking regarding expansion of her career, whether to move beyond part-time work or have a deeper involvement in non-profit work – she looks forward to working on something impactful and consequential.

Stacey closed off 2020 with a Zoom New Year’s Eve party complete with a live ball drop from her living room and disco bingo. She is not shy about her love of skiing, roller coasters or Fieldwork Hazy IPAs.

It’s clear that Stacey’s energy and bubbly personality will be put to good use, no matter what path she pursues.

Stay in the Loop