Penni Hudis is without a doubt one of the most delightful women you’ll ever have the
chance to meet.

Penni has a life-long commitment to understanding what it takes, and helping to create a
society committed to fair and equitable treatment for everyone, whether in our education
system, in the workforce, or in accessing healthcare.

She developed these values and commitments very early in life from role models, including
her mother and father. Her mother was a social worker and university professor of
gerontology and healthcare administration. Her father was a dentist who volunteered with
a team of dentists and physicians that worked together to repair cleft palates of low-income
children in the South Bronx. 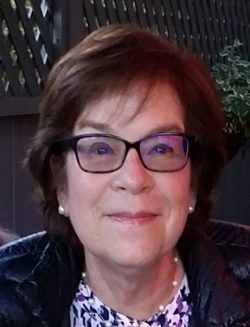 Penni trained at the University of Michigan as a sociologist and labor force demographer,
beginning her research work with a doctoral dissertation on race and gender differences in
earnings.

This led to careers as a university professor and researcher, corporate manager responsible
for analyzing possible discrimination within a large corporation, and research and program
design aimed at understanding and improving academic outcomes for low-income and
under-served high school and community college students.

Though Penni grew up in what she calls “a politically mixed household,” it’s these early life
values that led her to be the amazing role model she is today.

She has applied her values to volunteering as a nonprofit executive director and to board
service focused on health equity at the Women’s Cancer Resource Center (www.wcrc.org )
in Berkeley – a non-profit organization that serves low-income women of color, members of
the LGBTQ community, and all women on the margins of health care, due to lack of
resources.

The common thread among these seemingly disparate careers is a commitment to
understanding and working to remedy disparities in the most important academic,
economic, and health outcomes in our lives.

Leading up to retiring, and now in retirement, Penni has continued to follow through with
these commitments in several ways. She has volunteered extensively for the San Francisco
Job Forum (www.thejobforum.org) , which provides free job counseling services. She
continues to serve on the Board, including as Chair, of the Women’s Cancer Resource
Center. She is also involved in local philanthropy.

In a wonderful way of coming full circle, her board service at WCRC has actually taken her
back to her very first board commitment during her first academic job, which was at a local
Planned Parenthood chapter in Southern Indiana.

These activities led to her participating in Impact100 East Bay. She learned about Impact100
East Bay from the terrific Executive Director at WCRC, Amy Alanes. When Amy told her
about Impact100 she fell in love with the mission of engaging a committed group of women
who wanted to learn about and contribute significant grants to local, East Bay non-profits.
Amy introduced her to Marcia Gerg, who sponsored her as a member.

There were two things that sealed the deal to join Impact 100East Bay: learning about the
grant Impact100 made to Opportunity Junction, whose mission dovetails perfectly with her
life-long work on equity in education and employment and advancing economic
opportunity; and a great conversation with Marcia. She also loves the fact that Impact100 is
committed to trying new approaches to age-old problems facing the all-too-many under-
served groups in our society.

Her favorite work at Impact 100 has been serving on the Grants Committee. She enjoys
learning about a large number of nonprofits that are doing impactful work in the East Bay
and, simultaneously, using her decades of experience as writer of federal, state, and
foundation-funded grant proposals and as director of many grant-funded projects.
To this writer, it’s evident that Penni is also an example of an impactful woman whose work
is making a difference. And she’s not done yet.

Stay in the Loop